B-Day Special till October 31st: Save 33% on the 1 Year Membership! JOIN NOW 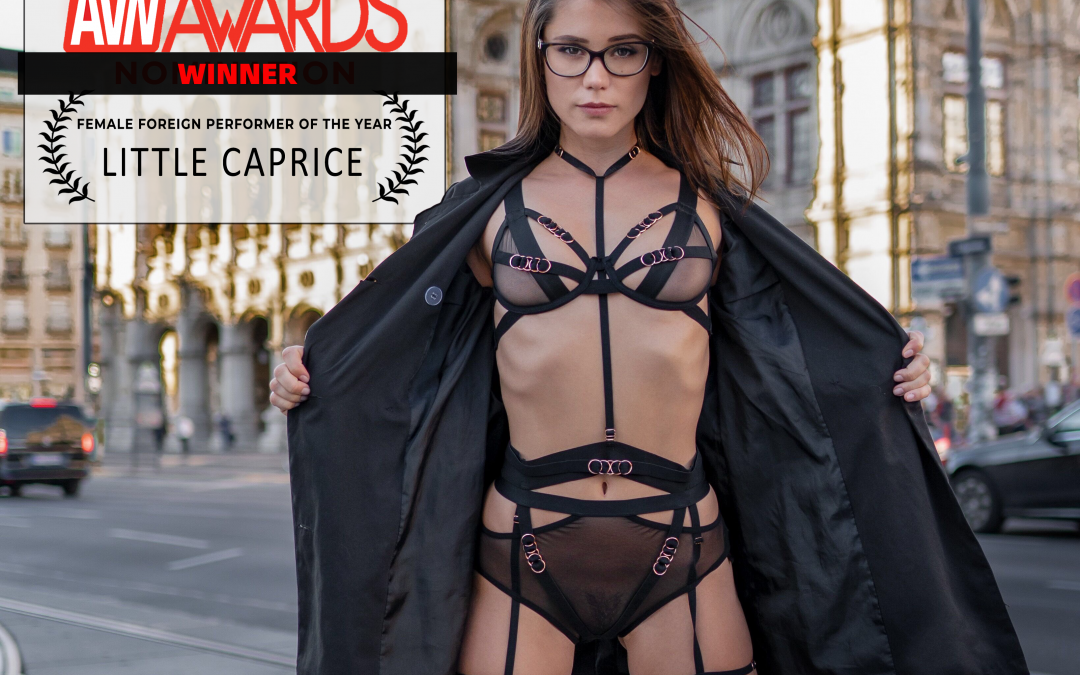 Czech Star Captures International Female Performer of the Year for Second Time
LOS ANGELES — Little Caprice went to bed early on the eve of the 2022 AVN Awards with plans to get up in time to watch it live.

Call it Breakfast at the AVN’s, because it was about 6 a.m. in Vienna, Austria, when the Czech superstar won 2022 AVN International Female Performer of the Year.

“This means the whole world to me!” Little Caprice, who took home the same award in 2020, told AVN. “Like literally, there is not a higher achievement for me in this industry as this award!

“And to got it for second time? That is really nice bonus! I didn’t expect that at all! Thank you so much one more time for this honor.”

Now 13 years after her splashy adult modeling debut, the stunner from Brno, Czech Republic continues to add to her trophy case as both a performer and as a producer for her official site, LittleCaprice-Dreams.com.

Little Caprice also picked up a gold statuette for Best International Lesbian Sex Scene for her electric performance with Lottie Magne in Caprice Divas Luscious for her site.

“Well, this one is also very special,” Caprice said. “The second year in row winning this category is awesome for me. Specially because those lesbian scenes are really special, we love to create them and I love to perform in those!

“Lottie is really one of the best starlets for me. She is talented, so pretty and we had really great connection together. So the scene is my favorite and I’m really happy we got to win.”

She lauded her husband and business partner, Marcello Bravo, who co-produces, directs and edits all the content for LittleCaprice-Dreams.com, which is fast becoming an influential studio with its diversity of series offerings and star-making productions.

“Marcello did a great job, too, with his direction and edit. He surprise me every time when I see the end product,” Caprice continued. “It’s not easy to create our own unique style—we definitely have it now.”

“I mean to get one award is great! Two is even better but three? Seriously? How does that happen!” Caprice said. “The group scene is also great. We shot that in summer on Ibiza, and as usual on Ibiza, we had a lot of fun there and the scene is very special, as we all look kinda similar with the girls. Alberto is one lucky guy.”

Blanco not only shared that scene with three remarkable women, he also received the 2022 AVN International Male Performer of the Year award. Caprice recalls shooting still photos on the beach, drinking sangria and “waiting for the sunset to get the amazing view which you can see during the sex.”

“It was warm and sexy and we had one great sex,” she added.

Caprice said she and Marcello have been getting over a bout with Covid and were just feeling better by the time of the AVN ceremony. After making her acceptance speech while laying in bed with Bravo—live on Zoom—and watching the rest of the show, Caprice admits she went back to sleep.

“I stayed in my PJs the whole time even,” she joked.

It didn’t take long for news of Little Caprice’s AVN triumphs to reach the Czech media as numerous press outlets have run stories about her trio of victories this week.

“Honestly, I don’t even get all the articles, because it is a lot,” Caprice said with a smile. “The Czech audience is happy about my success, and they are proud of me being Czech and representing my little country, so good…”

“Anissa is an evergreen. I mean she is so hot and sexy, I love her performance! And May Thai looked like Pocahontas; they both matched really well and you can tell from the scene how much they did enjoy this role—maybe too much!”

Caprice continued, “The chemistry was incredible. The whole team just sit there and watch how great they are all together!”

She explained their casting decision started with the concept for “Contract of Ownership.”

“She really liked her role, too, so there was no doubt! May Thai for her exotic look was sure for us, and she really match Anissa perfectly. They really played that role so good, and they let all out—poor Lutro! Anissa Kate is for me one of the best European performers. I was a bit sad I’m not in the scene with her…”

As Caprice looks ahead, she said there are some major things in the works for 2022.

“So 2022 couldn’t start better way for me—three AVN awards, the house is getting ready, so we are moving in a few weeks,” she said. “Our relationship is perfect; we are still full of ideas for our website! Currently, we are working on a new series. This one is something for all the ‘back-door’ lovers out there—ButtMuse!

She added, “We are still a tiny little team, but I think we are putting our hearts in the productions, and our fans and audience can see that and they love us because of that. So, let’s go 2022!”